Ultimate Texas Hold’em is a version of poker that is popular in casinos, not just with beginners but also among experienced poker players. The game combines the strategy and excitement of a traditional poker game with the speed and ease of learning of other casino games. It is precisely this combination that makes this poker version stand out from others and generates enthusiasm among players, both online and offline.

For all those who don't know much about the term Ultimate Texas Hold’em or finally want to learn the game themselves, we have summarized the rules in this text. It will give you a good overview of this popular casino game in a quick and easy way.

This difference significantly changes the structure of the game. Usually, each of the players receives their own hand and competes with it against the dealer. However, there are – especially in the online casino – also versions of the game where all players share a hand.

In Ultimate Texas Hold’em there are different betting fields. The player places their first bet on the «Ante» field. Next to it there is a field marked «Blind», where the player must place the same bet at the beginning of the game as on the ante field. Another bet can be placed on the field marked «Play» during the course of the game (more on this under «Gameplay»). Another field in Ultimate Texas Hold’em is the «Trips» field, which marks the betting field for the Trips Plus side bet.

The croupier places the cards on the table behind the player’s betting fields. Ultimate Texas Hold’em is played with a standard 52-card poker deck without jokers. After each round played, the dealer shuffles the cards and uses the full deck again. The cards already played are not put aside and only shuffled again at a later point, as happens in other casino games.

To start a game, the player places their bet on the ante field. It is important to understand that a bet of the same amount must also be placed on the blind field. On some game tables, this is nicely represented by a «=» sign between the two fields, symbolizing that the two bets are equal.

Once the player has placed their bets on the two fields, the first round begins with the so-called «preflop».

The game starts with the croupier dealing the cards. The dealer deals two cards to each player and to themselves. In the casino, all cards are dealt face down, after which the player may look at their own cards, but without showing them. In the online casino, however, the player's cards appear face up on the table, but the croupier's hand remains face down.

In this round, the player already has to make their first decision: the player can either make a «play bet» here of three or four times their ante bet or they can «check». If the player checks, the flop is dealt without having to make a bet. This minimizes the risk of loss, but also reduces the potential profit. The decision about whether the player wants to check or bid depends on their own starting hand, but also on their personal playing strategy.

In this round, the community cards come into play for the first time. The dealer places 3 cards face up in the center of the table. These cards are identical for all players, as well as for the croupier. These first three community cards are called the «flop» in poker.

Players now have another opportunity to make a strategic decision, but this also depends on the action in the preflop. Unlike other poker versions, Ultimate Texas Hold’em has the following rule: players who have already made a play bet in one of the previous rounds are not allowed to bet again. All those who have previously checked now have the choice of either checking again or placing twice their ante bet on the play field.

All players who have already made a bet on the play field are not allowed to make another bet in this round. For the players who have only checked so far, however, the final decision now follows: they can now either push a bet equal to their ante bet onto the play field, or refrain from bidding in this round, which will automatically cause them to lose all their previously placed bets and thus be eliminated from the game.

In this round, all cards are turned face up, including the dealer's. Now it is up to each player to make the best possible hand, consisting of five cards, with their own two cards and the five community cards, and thus beat the croupier's hand. When combining the cards and determining the winner, the usual poker hand order applies (see picture below). 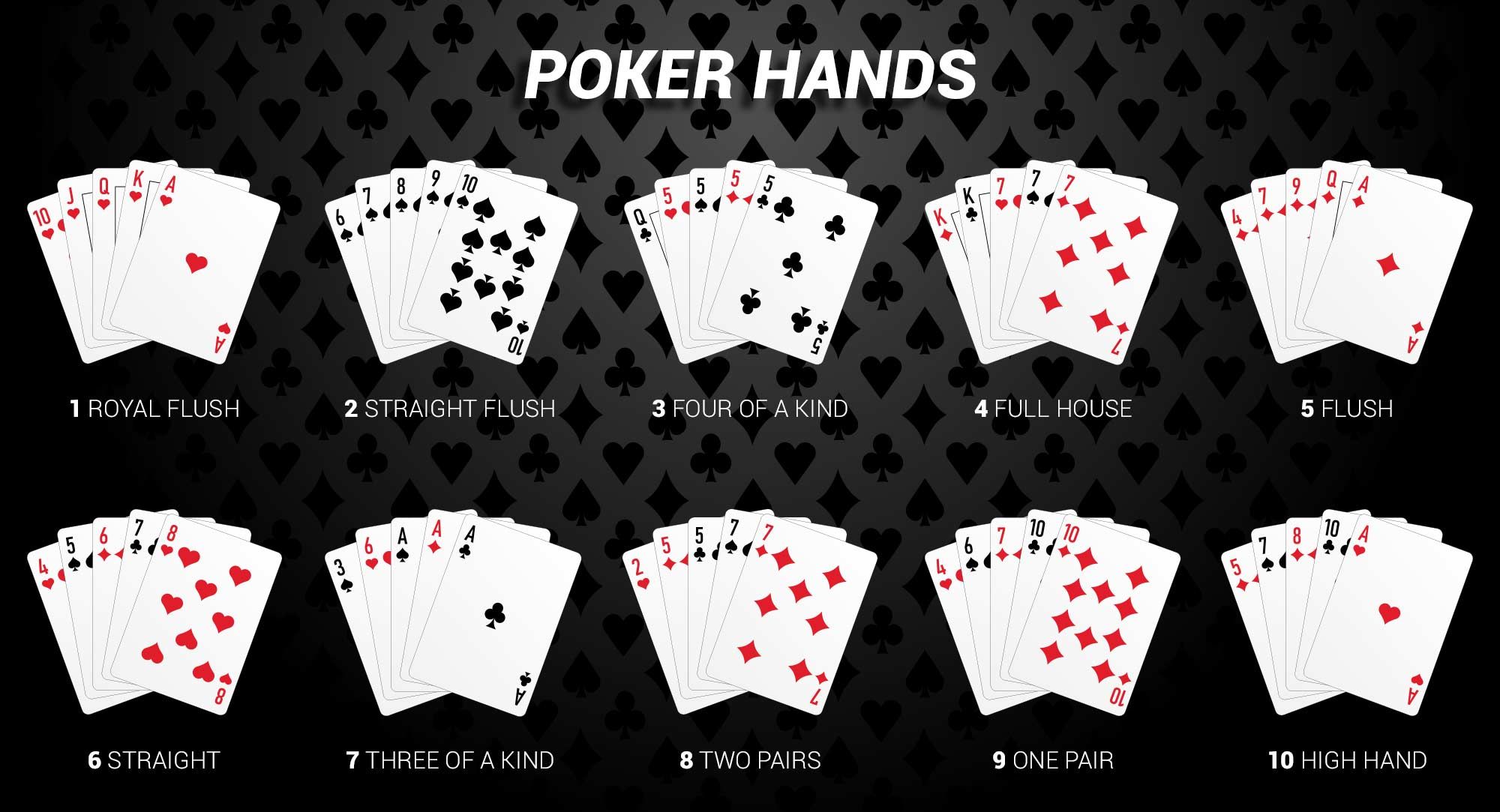 However, when deciding the winner, a special rule of Ultimate Texas Hold’em still comes into play. Unlike traditional poker, in Ultimate Texas Hold’em the croupier must qualify first. To qualify, their hand – consisting of the best combination of their hand and the community cards – must contain at least one pair. Depending on whether the dealer qualifies or not, the payout changes in case of a win, but also if the player loses.

The size of the payout in Ultimate Texas Hold’em depends on whether the dealer qualifies or not:

DEALER DOES NOT QUALIFY

The aim of this side bet is to make the best possible hand with your own two cards and the five community cards. The dealer's cards are not considered in this, it's all about your hand. To get a payout on this side bet, you need at least three of a kind. If you have a lower hand than three of a kind, you lose your side bet. The payout odds and probabilities for each hand are as follows:

PAYOUTS AND PROBABILITIES TRIPS PLUS BET

The game rules and payout odds may differ slightly from the basic rules described here, depending on the table. We therefore recommend that you get a quick overview of the table rules for the game in question before starting a new game.